Doug Bear catches a nice Utah brown[/caption] Fishing with Bill Reed, Doug Best and Doug Bear was a real treat. Guides meet people of all kinds of skill and ability, but rarely do you get a chance to spend the day with three anglers as talented these guys. I love teaching novice anglers, but it was sure fun to watch this group just take a river apart. Even better, we got to play with some great new gear, too. Bill brought out one of the new Orvis fiberglass rods in an 8’ 5-weight for dry flies and paired it with a Helios 2 in a 9’ 6-weight and a Mirage reel loaded with a Bank Shot line to throw streamers. A great combination on our low-elevation rivers with big fish. [caption id="attachment_2532" align="aligncenter" width="614"]

Bill Reed patiently waits for rising fish.[/caption] While Bill brought two rods along, he was particularly keen to fish dry flies, and he has the patience to do it even when the rises are few and far between. Multiple times he stood closely scanning a bank or seam for 30 minutes or more waiting for a second rise before presenting a fly. And when he did final make that cast, it was game on. [caption id="attachment_2533" align="aligncenter" width="640"]

Doug Best spotting fish[/caption] The Dougs also had dry fly fishing as their primary aim, but they were a little more willing to go deep (‘bobber fishing’ as Doug Best called it) once they saw that the fish were active down there and that they would fight like a ticked off rhino. After patiently waiting for rises all morning, Doug Best switched to a nymph rig just before lunch on our first day and immediately hooked up on a “crazy” fish that jumped four or five times before coming to net. Once he had the nymph rig on I could see the fish were in for trouble. His casts were perfect and his line management skills revealed his many years on the water. [caption id="attachment_2534" align="aligncenter" width="614"]

Doug Best is rewarded[/caption] For a guide, this was about as easy as it gets:  Park the truck, point to the river, net fish, take pictures, repeat. Okay, I confess I had trouble with #3.   Early on the first day we found a big fish suspended above a rock on the bank. Doug Best was up and he made a tough cast to get his dry right over the fish. The fish locked onto the fly a good two feet before it got there and he rose and sucked the fly down. Doug nailed it. Sadly, as I stupidly tried to capture video and simultaneously land the fish, I was caught unprepared when the fish darted right at my legs. I tried to get the net down but managed only to demonstrated the nuances of the infamous net maneuver known as “a swing and a miss.” Even worse, my miss came just close enough to catch tippet and just like that we were back to looking for fish. My worst net job of the year and it’s in front of these guys and on this fish.   [caption id="attachment_2538" align="aligncenter" width="576"] 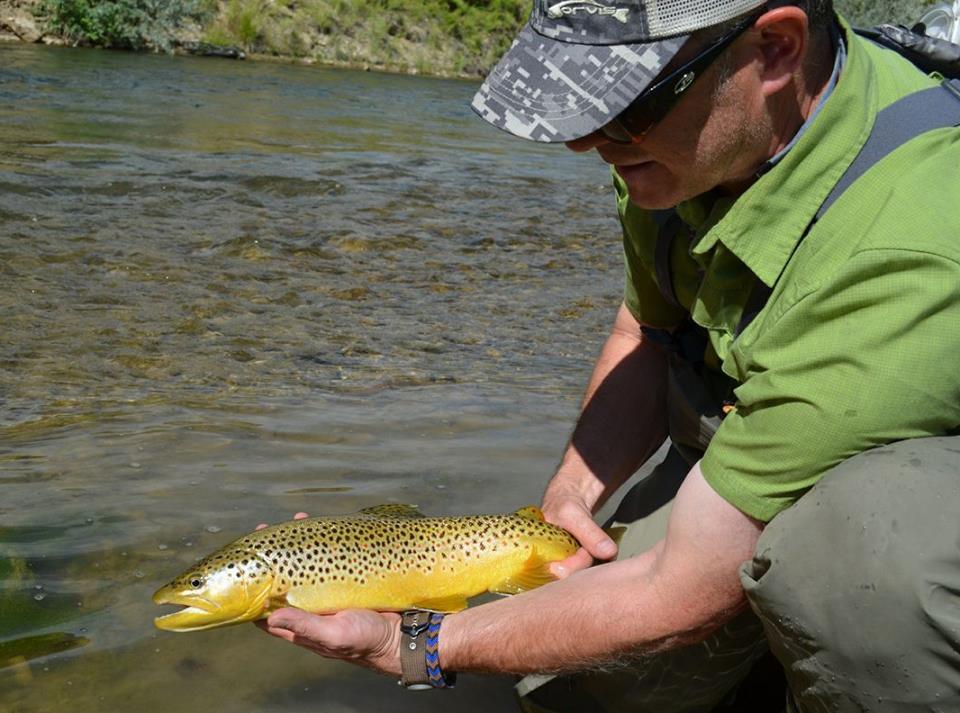 Bill Reed with a healthy brown[/caption]

To their credit they let me off pretty easy. . . . Better men than I. . . . In addition to being good guys, these three are great sticks. They were plug and play for a guide. The only time I had to impose any sort of guiding authority came after a fish that we never got to see. Doug Bear hooked him and he bolted upstream 20 feet before reversing course and rushing back past us before wrapping the leader on a root ball some 75 yards downstream from his original lie. When I collected the leader I discovered that despite my admonitions the previous evening, Doug had 6X tippet at the end of his leader. At this point I felt I had no alternative but to threaten Doug with physical violence if he didn’t immediately switch to something a bit more manly. Silly Easterners. . . .

Doug Bear with a big bow[/caption]

Doug acquiesced and tied on 4X tippet (a staple here in the West that apparently fish in the East turn their noses up to, and consequently so do anglers, like Doug, from the East. Silly Easterners. . . .). Doug’s conversion brought rewards from the fish gods who blessed him with a four-pound fish we found fining in a tiny side channel. When the hook set struck hit, the toad screamed straight away for fifty feet then leaped into the air throwing the hook before splashing back into the water like a chubby kid doing a cannonball. Or at least we thought he threw the hook—and we thought it for a full thirty seconds!

The video review(coming soon) shows Doug taking up the slack line and even throwing a roll cast to straighten it out for retrieval before to our great surprise the fish burst out of the water again just 20 feet in front of us. “Strip!!” Apparently the first leap was a set up for a bull rush past our feet and out into the main channel. Doug managed to hold as he tore past us and regained control. He got the fish to tap out when its attempt at hiding in a submerged bush failed. His head was hidden, but the rest of his body was in plain sight. Kind of a ‘You-can’t-see-me’ moment. As I lifted the netted fish out of the water I was shocked, not because it was big, but because it was a rainbow, and we haven’t seen one of those here for at least four years.   Time always flies fast on the river, but the two days this group was at Falcon’s Ledge disappeared in a flurry of great casts, mends and fish. And just like a football coach who is only as good as his players, for two days, I just might have been the best guide on the planet. Written by Bryan Eldredge Photos courtesy of Bryan Eldredge [flagallery gid=45]]]>