Through extensive research I had found that Rok Lustrik is one of the foremost experts in Slovenia fly-fishing and got in contact with him.  He was on vacation with his family, but was kind enough to set me up with one of his best guides.  My luggage had been lost by the airline, so I had to borrow some old boots and waders and a rod I had never even heard of called a “Crystal Princess”.  With my borrowed gear, my guide and I took a train through the Julian Alps to a tributary of the Soca River that my guide indicated held Marble Trout. 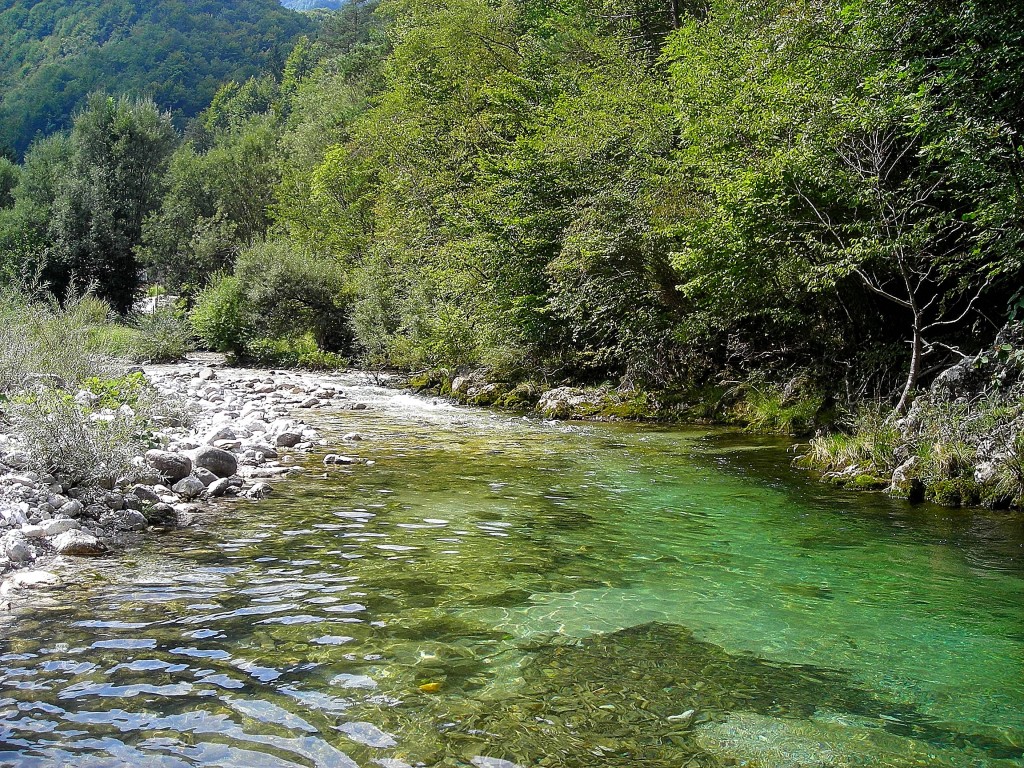 We hiked down to a run where the stream was so clear we could easily see several large rainbows moving back and forth in the current.  We put on a pheasant-tail nymph and I cast it to the top of the hole.  The current brought the nymph back into the feeding trout.  A large rainbow took the nymph and I set the hook.  The fish ran back and forth in the deep run and after a short struggle my guide netted a fat 19-inch rainbow. 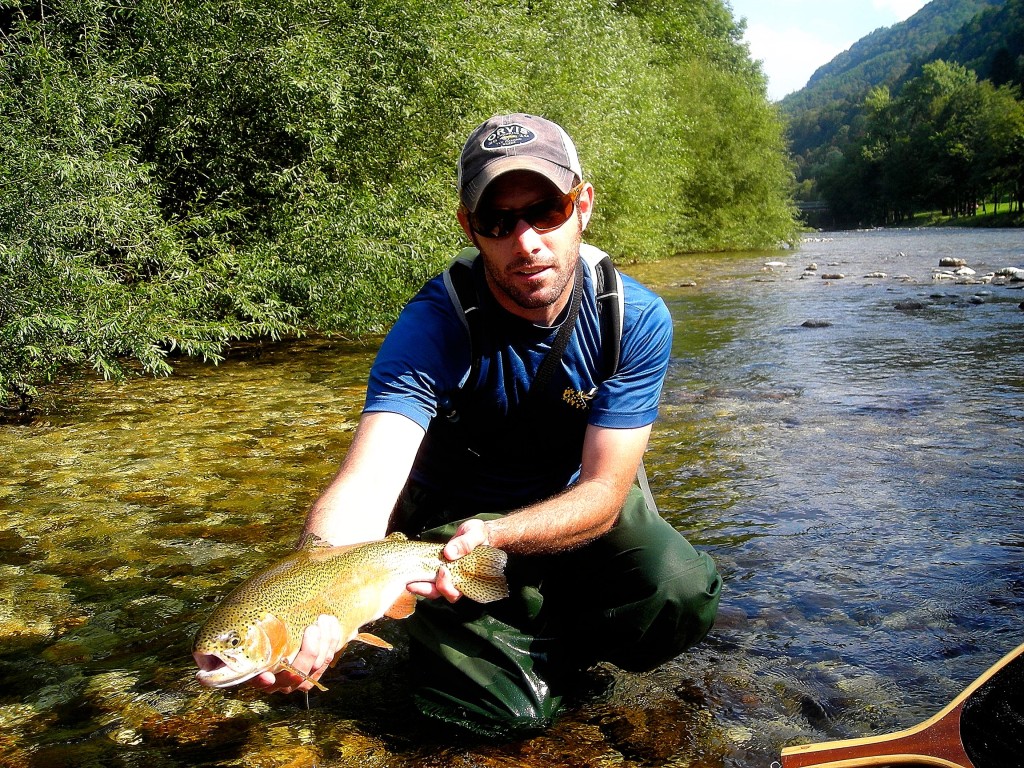 I was happy with the fish, but I was so intent on catching the endemic marble trout I almost overlooked the great fish.  We continued up river and began to see rising fish.  I switched my fly to a rust-colored Klinkhammer.  After casting to a few rising fish I hooked a small riser.  I quickly reeled him in and saw that it was a Marble Trout.  I was so excited that I didn’t care it was only about 6 inches long.  My guide seemed stunned when I asked him to take a picture of the small fish.  I told him that was the first Marble Trout I had ever caught and I wanted to get a picture in case I didn’t catch another.

After taking the picture my guide assured me that I would get the chance to catch more marble trout.  He was right and it didn’t take long at all.  We continued walking up stream and just about 100 yards upstream on the outside edge of a big bend in the river we saw a big nose come up for a  natural.  The fish was lying underneath a low hanging tree limb on the far side of the bend, so it wasn’t an easy cast or drift.  If I cast too high I would catch the tree limb, if I didn’t mend correctly I would get drag, and it was a long cast without the ability to get closer due to the clearness of the water.  I cast as delicately as I could upstream from the fish about 10 feet in an effort not to spook the fish or catch the tree limb.  As my fly drifted I mended my line to avoid any drag and let it slide under the branch.  The fish exploded out of the water and I set the hook.  The fish ran downstream peeling line off my reel.  I walked down river, trying to keep up.  After his initial run he came back upstream, ran back and forth shaking his head.  He eventually tired and my guide netted a beautiful 20-inch marble trout. 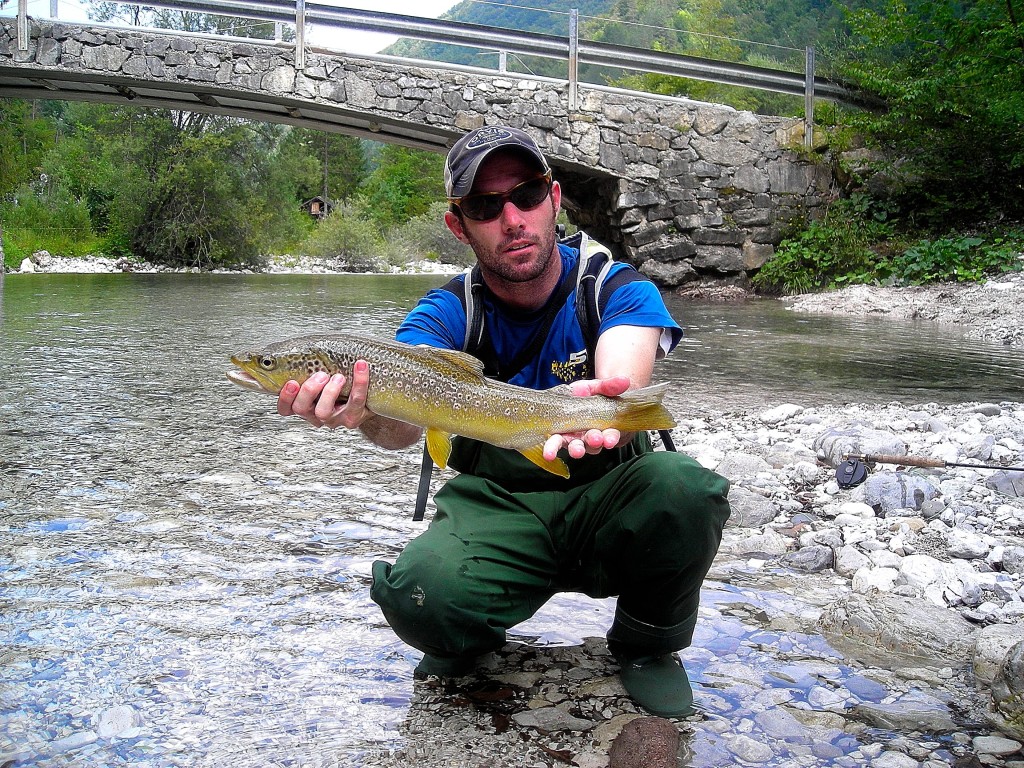 My wife and I had many more memorable experiences fishing and hiking throughout the magnificent Julian Alps in Slovenia.  Beautiful natural resources abound in this spectacular country.  Clear rivers drain out of granite peaks and tall trees are skirted with an understory of thick brush and large ferns.  However, despite the astonishing beauty surrounding you it is tough to beat the marbled back of a magnificent Slovenian marble trout. Written by Dave Danley Pics courtesy of Dave Danley  ]]>