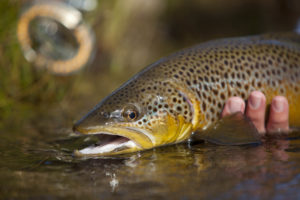 Have you ever gone fly fishing immediately after a cold snap, hoping the fish would be eager to feed, only to find few trout or no action at all? Here are 10 things to help you have a more enjoyable time on the water after a sudden cold change. These lessons can help set expectation, hopes, and tactics on such days.
1. Wait a Day
If there is too steep a barometric and temperature change, trout feeding activity will drop substantially. This is particularly true in fall and late spring. Summer is less impacted because there’s not much chance of the bottom falling out (read: snow). But if a spring or fall day is in the 70s and the next day has snow on the ground, chances are you’ll experience a day of sluggish fish regardless of the hatch density. That steep decline in temperature has impact, and trout usually need a day to adjust. Of course, the best time to fish is when you can, but if you have the option of waiting a day, you’ll probably have better luck.
2. Sleep In
Hatches aren’t likely until early afternoon and normally only last for two to three hours. Temperature and barometric pressure changes affect the entire ecosystem, slowing everything down. There are always exceptions (like tailwaters, lake outflows, and some spring creeks), but if there’s a serious drop in temperature, there’s a much narrower window for hatch activity. If you love hatches and are loath to fish streamers or nymphs, sleep in and enjoy another cup of coffee.

3. Dress Accordingly
Be prepared for cold air and water. Dress in layers, with a good hat, gloves, and a buff. When landing a fish, be prepared to have really cold hands. Solid preparation will help you stay out longer and catch a few more.
4. Throw Streamers
Mornings can be extremely slow, with fish glued to the bottom. The odds of moving anything on dries is low, and nymphing can also be slow. Streamers are your best bet for mornings and evenings. It’s best to fish them just off the first depth step of riffles, working from thigh-deep to shoulder-deep water. Fish the water close to you, and then progressively cast farther out as you quarter your way downstream from the head. Your cast should aim across the current. Let the streamer swing, then twitch it, pause, twitch again, pause. Do this repeatedly through the trough. Once your fly reaches the end of the riffle, give it a few strips upstream before casting again. Less aggressive stripping is best for sluggish trout. Don’t be afraid to work from head to tail on the swing, and then . . .
5. Drift Some Meat
Dead-drift small streamers, as you work your way back up a run, like you’re nymphing. Get your indicator out. You’ll need one that will support a weighted streamer. Hang a size 10 tungsten conehead streamer under it. Sometimes sluggish trout are waiting for the next dead thing to drift past. A chamois leech or chamois worm can also be highly effective.

6. Hatches Start Below the Surface
When heavier hatches do come off, trout can be active, but you may not see a single rise. Trout are less likely to rise vertically in the water column, but they will sway to feed on emerging and drifting nymphs at depth. Hatches get going in the afternoon, but the migration, movement, and early insect emergence can occur an hour or two earlier–a great time to start nymphing.
7. Keep It Short
Short-line or Czech nymphing is incredibly effective in troughs and riffles 2 to 4 feet deep because the broken rock and gravel in them is full of Baetis (blue-winged olives) and other clinger mayfly nymphs. Czech nymphing gets flies in the zone quickly and repetitively, increasing your chances of hooking up with fish that may be slow to respond. If you do nothing but target two or three prime riffles and troughs in a four- or five-hour outing, you’ll likely have a ball.
8. Get Small
Life slows down, so size down. Trout are sluggish, and so too are the larger stonefly nymphs. These are times to tie on tungsten beadhead nymphs in sizes 16 through 20.

9. Then Go Big
Finish ’em off with a larger, shiny nymph. That may seem to contradict the above, but there are no absolutes in fly fishing. Start with the less intrusive small flies, and then drift a large stonefly nymph to entice the stragglers that might have eaten the small stuff but popped off.
10. Shiny, Happy Flies
Flash ’em. A little flash in dark conditions sometimes gets the trout’s attention, so choose patterns with some kind of bead, flashback, etc. Brass, copper, and gold all work, but we’ve found that copper beads work better on tannic waters, while gold is the best choice for deep, fast, clear-water riffles.
In western North America, spring and fall temperatures and barometric pressure gradients can be severe. Rainbows, cutthroats, browns, and bull trout act and feed decidedly differently after sharp temperature changes. We’ve found that cutts and bull-trout respond more quickly, followed rainbows, with browns and brookies taking a bit longer. Of course Rocky Mountain whitefish are native and therefore well adapted to these conditions, so they will be the first species to turn on. Don’t be surprised to find yourself in the middle of a whitefish derby with your friends.